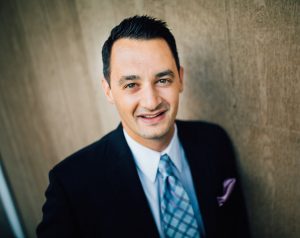 As a child growing up in Sarnia, Dr. Michael Rondinelli spent countless hours in his cousin’s dental office. He admired his cousin for being a leader in his community and working at a job he loved. Dr. Mike dreamed that one day he would also serve his community. After graduating as an Ontario Scholar from St. Christopher’s High School, Dr. Mike attended the University of Western Ontario, and earned an honours BA with a double major in genetics and molecular biology. He then made the bold decision to attend the University of Detroit Mercy School of Dentistry in downtown Detroit, Michigan.

It was in dental school that Dr. Rondinelli found his true passion and calling in life. He excelled in academics and became the top clinical student in his class. He earned several awards and distinctions, including:

Since graduating, Dr. Mike has returned to the university and often serves as a guest lecturer.